10 of the most beautiful mosques in Iran

With their intricate geometric designs, fine artwork and stunning vibrant colors mosques in Iran are a sight to behold. So whether you’re a visitor or a local, these beautiful holy places are sure to enchant you no end.

Below is a run-down of some of the famous and best mosques in Iran. They won’t fail to make your heart leap. Happy travels!

Also known as the ‘Pink Mosque’, this is one of the most beautiful pieces of architecture in Iran. Firstly, you’ll notice its dazzling stained glass. Then, you’ll see thousands of rose-hued painted tiles on the ceiling. Lastly, rich Persian rugs covering the floor. You have the feeling of stepping into a rainbow of kaleidoscope at this place of worship. 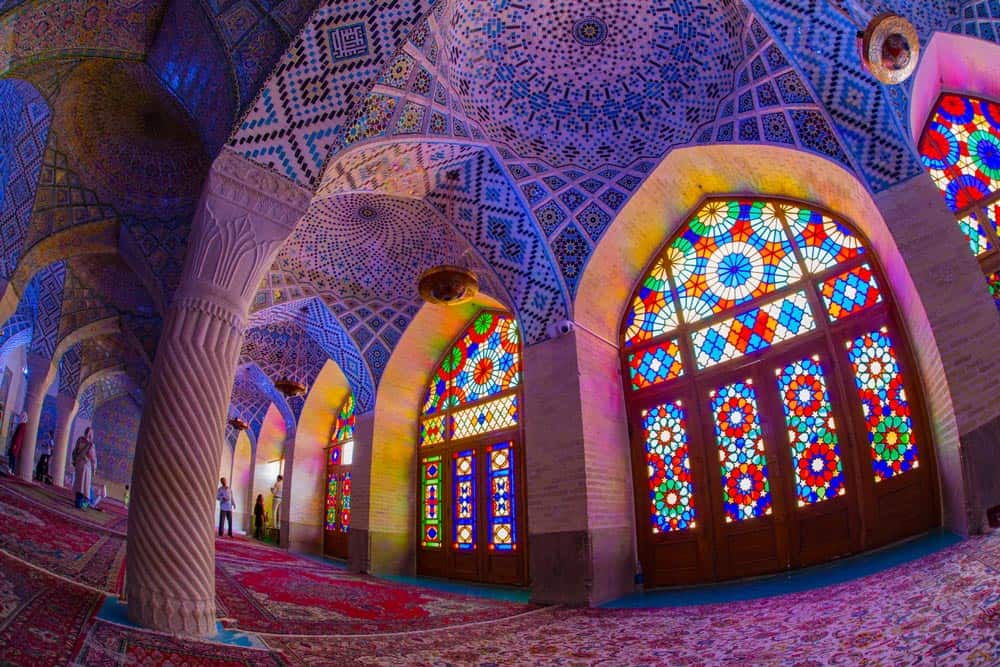 Inside the mosque, there is an open courtyard. Flowers surround a rectangular pool in the center always. This revered place consistently features on the list of the most beautiful mosques of the world.

For most spectacular sights, visit early in the morning or in late afternoons. This is when the sun’s rays cause magnificent glass patterns to reflect onto the floor.

This mosque also goes by the name of ‘Friday Mosque’. The glorious 15th century place of worship features some of the highest minarets in Iran (and probably in the world) at 48 meters. The outer view comprises of complex geometric patterns replete with exquisite calligraphy and a splendid tiled entrance portal. 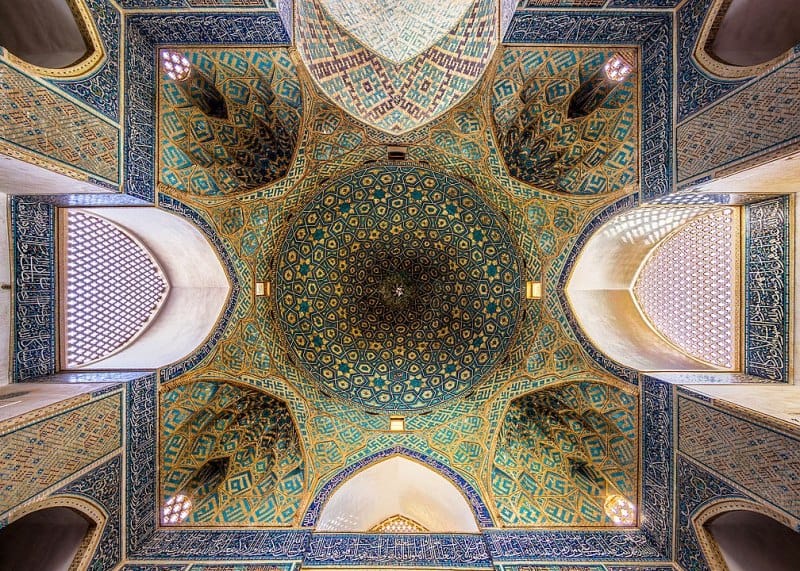 Inside, one finds honeycomb tiles. They’re particularly notable for the prevalence of faience, kufic script and extensive ceilings full of artful decorations.

We’d recommend you to have an expert or guide along with you when you visit. This is to take the entire significance of the place and enjoy it better.

What makes this mosque unique and architecturally unusual in Islamic world, is its lack of minarets and courtyards. There are steps leading up to the entrance. Built in the 17th century under Shah Abbas I, the masjid features an off-center dome. The signature blue and turquoise tiles of Isfahan become evident around the dome’s summit. The dome’s interior is designed professionally like a peacock tail. 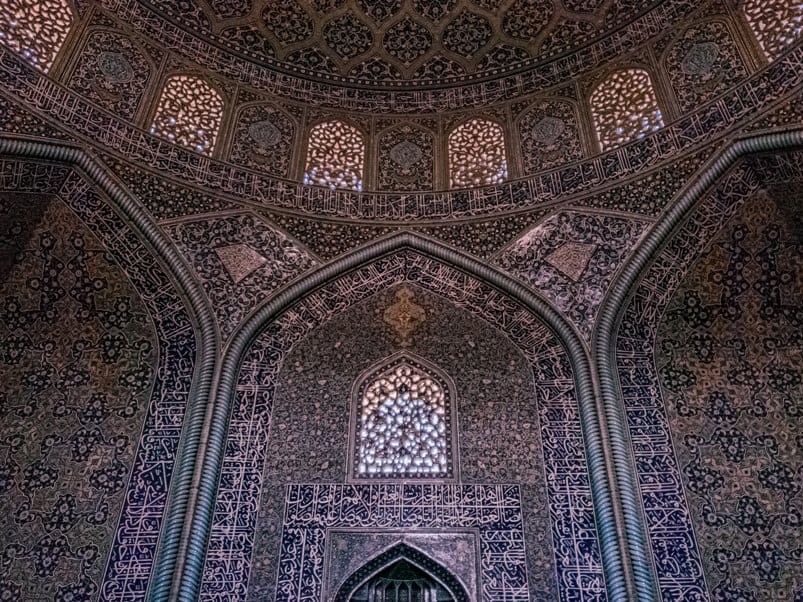 Additionally, the Mosque’s delicate cream-colored tiles change color throughout the day from cream to pink with the changing position of the sun. It is believed that the place was never intended for public use since it served as the worship place for the women of the shah’s harem.

Its mosaic walls, sunlight filtering in through latticed windows and deep blue tile work all add a certain surrealistic quality to the air. A must visit place if you are in Iran. They allow photography inside.

This vast mosque has often been known as ‘Stone forest’, owing to its expanse. Also, where traditionally Iranian mosques comprise of 4 halls (iwans), Vakil mosque features only 2. Architecturally this spectacular place comprises of 48 spiral pillars, mosaic ceilings, pearl arches and the beautiful marble Minbar (the pulpit from which an Imam speaks). 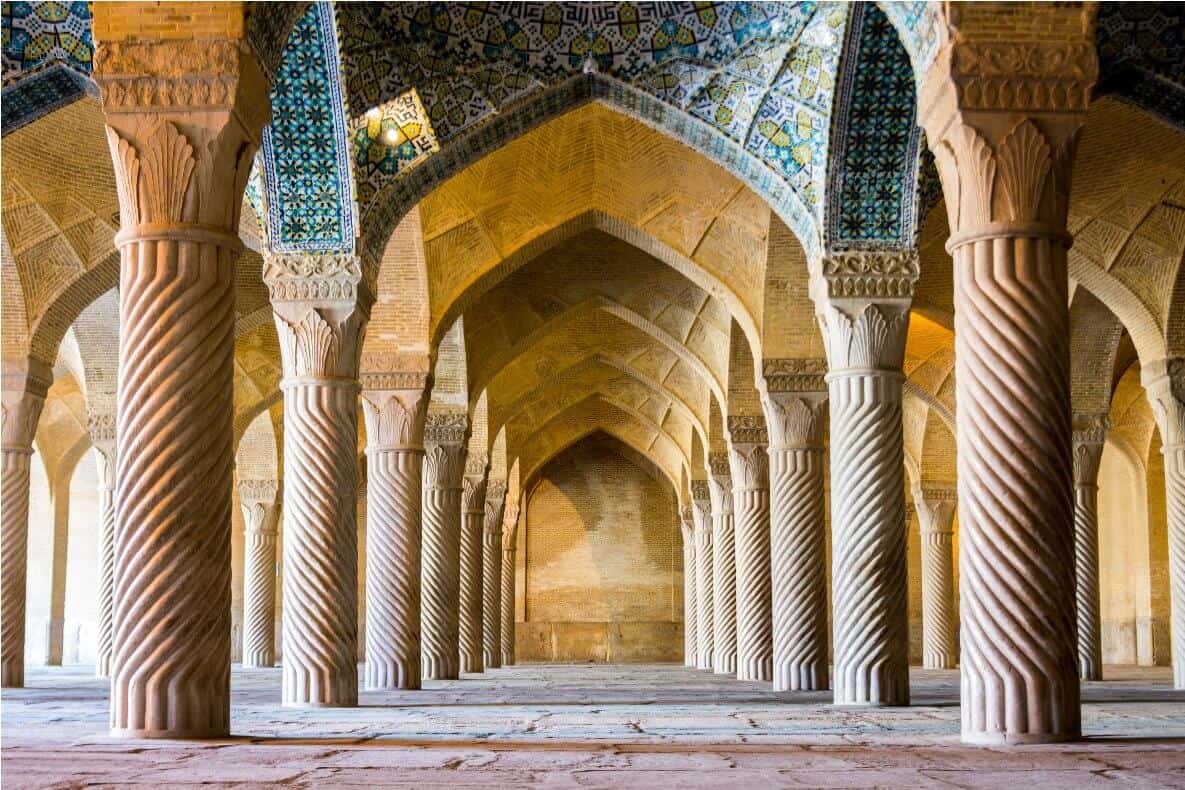 The minbar is also one of the unique features of the mosque. They carved it from a single solid piece of green marble. Its halls and court come decorated with typical Shirazi haft rangi tiles. The mosque is easily reachable owing to its central location in the province.

This beautiful ‘glittering’ (literally) mosque never fails to leave its visitors awestruck. It’s one of the most famous mosques in Iran. The site began as a funeral monument housing the shrines of Ahmad bin Musa and Muhammad bin Musa (brothers of 8th Imam Reza). Future rulers of Iran renovated the mausoleum over the centuries and the present structure dates back to the 19th century, while the turquoise dome is about 60 years old.

Mosaics of mirror tiles and glass shards cover every inch in the interiors of the place. They scatter the light of the chandeliers in all directions.

Your reflection ceases to exist here, as you face the walls. Since each subtly-angled surface on the walls renders it to pieces. The resplendent blue tiles, stucco inscriptions and lapis lazuli further add to its grandeur.

Queen Tash Khātūn commissioned this signature mirror-ball ambiance. She desired the mosque to intensify any light a thousand times over. Hence the name ‘Shah Cheragh’ (loosely translating to King of the Light in Persian).

The spiritual aura of the place further enhances the beauty of this enchanting glassy wonder. A must-visit.

This mosque constructed in 1465, with its fine turquoise mosaics & intricate calligraphy is quite famed. A manifestation of classic Timurid architecture, it was commissioned by Jahan Shah. The mosque houses tomb of Jahan Shah as well. It was badly damaged in an earthquake in 1773. That left only the main iwan (entrance hall) and Jahan Shah’s tomb unharmed.

The altar mosaics, muqarnas, Islamic designs and tile work with Persian blue, white and golden colors are all a sight to behold. Also the Blue Mosque of Tabriz is the only blue mosque (out of 3 in the world) with 80 percent of its ornaments in deep marine. So yes, this is one of those mosques in Iran you should visit.

Best time to visit is in the daylight.

This mosque is known by various names: New Abbasi mosque, Royal mosque and Imam mosque. Regarded as one of the masterpieces of Persian architecture, it is recorded in the United Nations World Heritage Sites. The splendor and beauty of the mosque mainly lies in its septet hued mosaic tiles open iwans and beautiful calligraphic inscriptions. 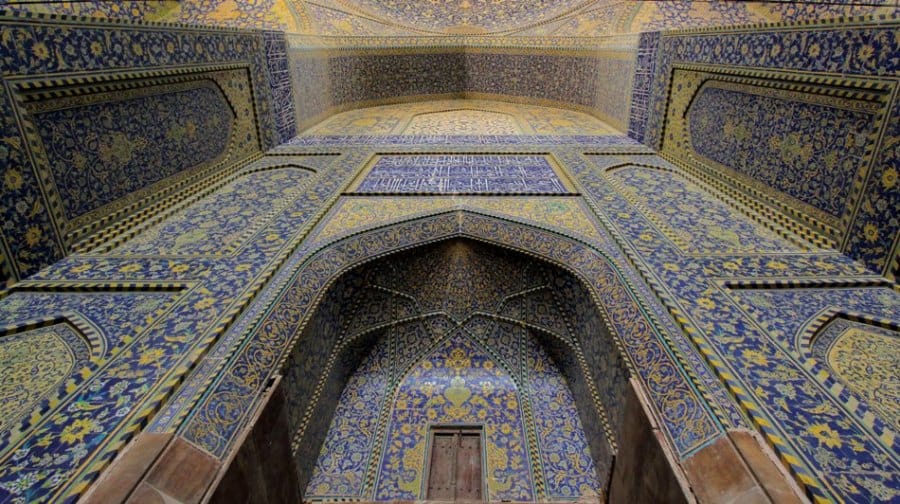 Upon entry don’t forget to observe the art and architecture of the entrance and the patterns on ceiling. They are some of the most stunning out there. Standing under the central dome, visitors can observe the special acoustic properties. A stone here right in the middle of the dome (not alike others) when tapped echoes loudly through the rest of the building.

This was the ingenuity of architects for allowing the imam to speak at a moderate volume but still be heard by everyone in the mosque. Visitors can test the phenomenon by stamping the ground on the stone, standing on the stone or clapping their hands under the dome. This is a unique experience you can’t have in all of the mosques in Iran.

What’s more, the mosque features on the reverse of Iranian 20000 Rial banknote.

The wife of a Timurid ruler in 15th century, Empress Goharshad commissioned to build this mosque. It is presently a part of Imam Reza Shrine complex in Mashhad. The architecture comprises of a big azure dome, four verandas, a courtyard, and two beautiful minarets. Each minaret is 40 meters high.

At the end of the cella, there is a big altar with a stone dado and a mosaic faience shell. Tiles of flora, artistic and arabesque designs decorate the mosaic faience of the courtyard. 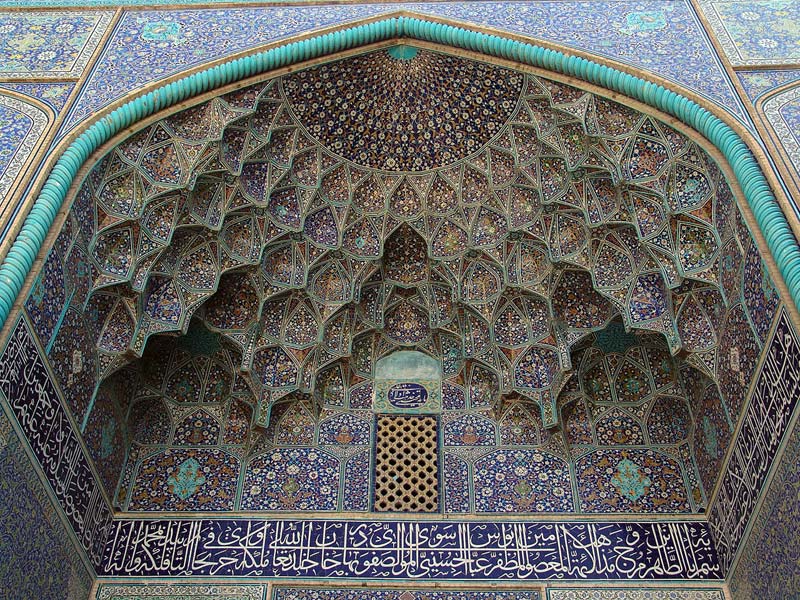 Fine mosaic and glazed tiles decorate the entire surface of these minarets, of the walls and the surrounding colonnades. The mosaics include colors such as ultramarine, white, clear green, yellow, and ebony. Its azure dome creates a beautiful contrast into the golden one of the Imam Reza holy shrine. Definitely worth a visit.

This mosque has ofttimes been described as the finest Islamic complex in the historic neighborhood of Kashan. It is a brick mosque replete with geometric tiles, intricate wood-works, plaster-works and mirror-works.

Famed for its symmetrical design it consists of two large iwans, a dome, beautiful arcades and a courtyard. The place even features a Badgir, a traditional wind-catcher in Persian architecture that worked as an air-conditioner for the building.

The serene peaceful atmosphere of the mosque further adds to its allure. A visit here is sure to leave the visitors feeling rejuvenated.

Its characteristic golden dome is one of the most significant ones in Iran. The northern hall is adorned with gold from inside and its figures are demarcated with gold too. 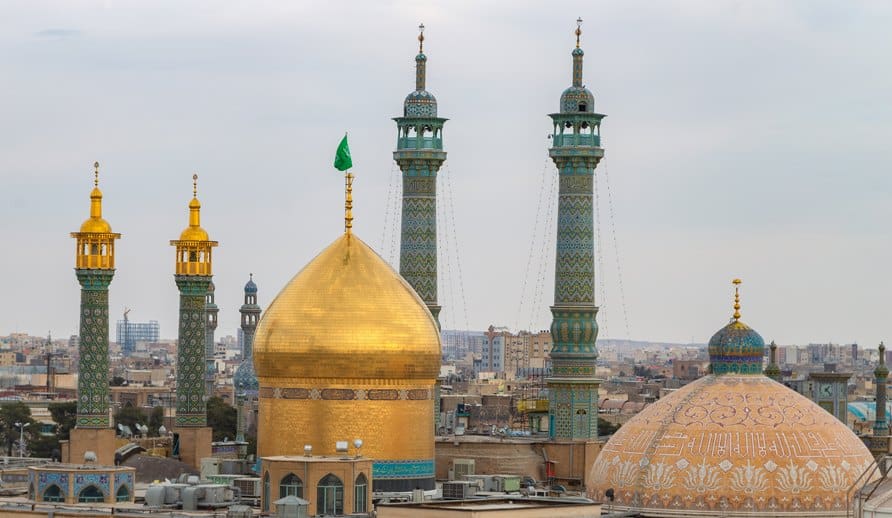 There’s also a museum here containing good amount of gifts and valuable things. People have gifted these to the holy shrine throughout its long history.